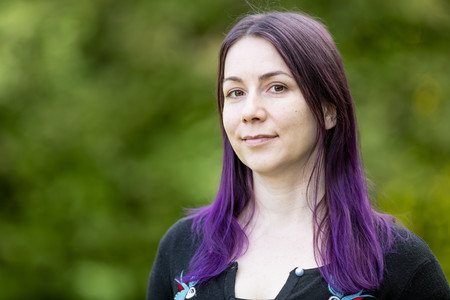 After receiving my BA MSci (Biochemistry) from St John’s College, Cambridge, UK, and a PhD from the University of Edinburgh, I did my post-doc in the Cancer Research UK Cancer Therapeutics Unit at the Institute of Cancer Research (ICR) in London.  This was an ideal halfway house between academia and industry, getting to experience the drug development pipeline and closer contact with the clinic. At the ICR I really enjoyed the times I spent on multi-disciplinary project teams with a common goal and knew I wanted to continue working in a similar environment. I decided I wanted to move into cell therapy, as I was excited about the prospect of working on cutting edge treatments.

I joined Adaptimmune in 2014 as a Senior Scientist, progressing to Group Leader at the end of 2016.  In addition to line managing a small team, my role is coordinating projects within Preclinical Research, including the entire preclinical work (or “preclinical package”) for potential products.  Preclinical Research typically gets involved when a clinical candidate T-cell receptor (TCR) has been identified in our pipeline or when sufficient proof-of-concept data for a next generation project has been generated by our Cell Research group.  We perform all the non-clinical safety and potency testing required to support regulatory agency submissions for new treatment candidates, which will then make their way to being investigated in patients.

The Next Generation ADP-A2M4 TCR

Our Cell Research group generated proof-of-concept data for four potential next generation enhancements for our existing ADP-A2M4 TCR.  We decided to test all four in parallel at the preclinical level, which was an interesting new challenge, as we’d only ever tested one at a time before. From there on I coordinated, supported by a large team, all the preclinical work, from the production of five donors’ worth of “mock-clinical” T-cells from our T-cell production team, to all the safety and proof-of-concept testing for all four next generation packages. In addition, we wrote the reports ready for regulatory submission.

Many of the safety assays could be performed on all four constructs in parallel, but to add to the complication of this parallel testing, each next generation strategy required different bespoke assays that directly addressed their theoretical mechanism of action. Together these projects were a massive team effort, involving the work of more than 30 scientists over the course of about 18 months.

This work was assessed by the Next Generation Project Team that had members from Process Development, Manufacturing, Translational Science, Clinical and Regulatory groups. Out of the four potential options, the CD8a enhancement was ultimately chosen as the first next generation project to be developed for clinical use.

Rationale for the Next Generation ADP-A2M4CD8 Program

There are two types of T-cells in our therapies, CD8+ and CD4+ cells. CD8+ cells typically do all the short-term headline grabbing functions, such as killing the tumor, whereas CD4+ T-cells have a more subtle but very important support role, coordinating the CD8+ cells and communicating with other cells of the immune system to co-ordinate the response to the tumor.

A TCR needs help from what is called a ‘co-receptor’ to first ‘notice’ a tumor cell, and then fully interact with it. The TCRs we discover are naturally more suited to using the CD8 co-receptor. This means in our first generation products, the CD4+ T-cells might not be activated to their full potential.  We still get the CD8+ functions that benefit patients, most importantly killing the tumor, but maybe not the more subtle CD4+ help to improve communication and long-term effects of the product. The ADP-A2M4CD8 therapy includes the CD8 co-receptor alongside ADP-A2M4, our existing TCR already in the clinic. With this enhancement, any CD4+ T-cells in the therapy should also be able to effectively notice the tumor cells and perform their support functions to their maximum potential.

The Ups and Downs of Testing ADP-A2M4CD8

We wanted an assay that involved more than just T-cells and tumor cell lines—one that directly addressed some of the functions of CD4+ T-cells. One of our team worked up a dendritic cell assay, including incubating with tumor cell lines to better represent the in vivo situation rather than adding peptide to the DCs as is more usual. The results turned out even better than we had hoped.  The striking difference in cytokine release can be seen in figure 3 of our AACR 2019 Poster.

There weren’t really many downs, as the preclinical side of the project went remarkably smoothly!  The only frustrating moment was the US government shutdown in December 2018 coinciding with the submission of our pre-IND meeting request to the FDA. We were in limbo—not really sure what would happen and what impact it would have on our timelines.

Many next generation enhancements involve arming the T-cells to overcome specific inhibitory signals in the tumor microenvironment. These are often not ubiquitous in all tumors or patients. As the CD8a boosts the engagement of all CD4+ T-cells, it should work across tumor types and situations. As well as some short-term benefits like turning the CD4+ T-cells into tumor-killing cells, the enhanced CD4 functions should hopefully aid with more benefits, such as engagement of the wider immune system and increased formation of memory cells, making the treatment longer lasting.